So You Thought Fish Comes From the Supermarket!

Have you ever wondered, where did the fish on your plate come from? In most cases the ocean, unless it was farmed, which albacore definitely is not. But it does not come from cans in the supermarket anymore than electricity comes out of the wall socket or gasoline from a pump. If it is albacore tuna, someone caught it somewhere in the world most likely by hook and line methods (surface trolling as the U.S. fleet does or long-lining methods in more tropical waters as the Asian fleets predominately do.)

As you sit down at your dinner table or favorite eatery consider the fish on your plate and imagine it’s journey from where it was caught, processed, shipped, and eventually ending up with you.  It can all be traced to some degree back to some fishermen in a boat, somewhere at sea, many hundreds or thousands of miles from shore trying to catch this healthful delicacy for their own living and subsistence for your eating pleasure and health.

At any given time there are small boats roaming the faraway corners of the planet day and night in search of albacore tuna. In the case of the U.S. albacore fishermen at this time of the year, there are about a dozen boats that have traveled over a month to reach the fishing grounds in the south pacific 500-1,000 miles south of Samoa and Tahiti. This region is the subtropical convergence zone known to sailors as the “Roaring Forties”. The area is about as far from anywhere on earth and has notoriously bad weather but as a mirror image of the North Pacific albacore tuna migrate through this zone from New Zealand to Chile.

These fishing boats are relatively small, especially from the perspective of where they work. They range from 65 feet to 90 feet in length with an owner /operator and generally 2-3 crew. These boats freeze the tuna onboard at very low temperatures and catch all on hand lines with barbless hooks. Each vessel holds from 50 -100 tons. The fleet leaves the west coast before Christmas and may never see a port until April. They are all self- contained as far as provisions such as fuel, fresh water, and food.

At the end of the season the boats take the frozen fish back to the west coast or transship from Tahiti, American Samoa, or New Zealand to quality sashimi markets in Asia. In the past before better refrigeration systems on vessels most albacore was landed in American Samoa at Star Kist or Chicken of the Sea for canning but that has all changed now with 100% of the South Pacific catch sold to sushi, sashimi, and high end value added outlets. This is a great benefit to the fishermen who receive more, their crew, and the eventual consumer like you with the fillet or medallion of albacore prepared on your plate.
Posted by Wayne Heikkila at 1:14 PM

Please give us your feedback, insight or ideas. 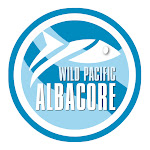 "Caught one at a time in the Pacific Northwest"